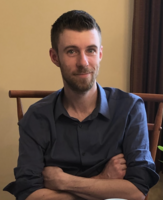 Belchertown/Palmer- Glenn J. Moquin, Jr. died tragically as a result of a single motor vehicle accident on November 22, 2021. He was born July 22, 1990 in Springfield, and is the son of Gwendolyn (Piorun) D'Aguiar of Belchertown and Glenn J. Moquin, Sr. of Amherst. Glenn grew up in Belchertown and worked for the past four years as a plumber's apprentice, currently rising to Tier 4. Glenn had a great sense of humor and could always make those around him laugh. His love for animals and most especially his Husky, along with video gaming, kayaking, anime and manga brought much enjoyment to Glenn's life. Visiting Paris, he realized a dream of his and looked forward to going back with Beth. There are many family and friends that are dearly going to miss him. Besides his mother and father, Glenn will always be remembered by his longtime girlfriend, Beth Hall as well as siblings, Grace and Grimm D'Aguiar of Belchertown, Justen Moquin and his wife Sharai and their son, Joseph of Warren, and Ashley Brooks and her husband Kevin of Belchertown. His paternal grandmother, Althea Moquin, of NH, maternal grandfather Stanley Piorun III of CT along with uncles, Stanley Stephan Piorun IV and Eric Moquin and his wife Charlene aunt, Alisa Cook and her husband John, Godmother and auntie, Randi Shenkman, and best friend, Bill Fontaine and his wife Alyssa also survive him. Visitation will be held Monday, Nov. 29th from 5:00-7:00 p.m. at the Beers & Story Belchertown Funeral Home. A Funeral Mass will be Tuesday at 10:00 a.m. at St. Francis Church with burial to follow in South Cemetery. For those wishing, donations may be made to either Dakin Humane Society, 171 Union St., Springfield, MA 01105 or Barc PO Box 161 Belchertown, MA 01007