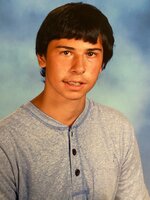 South Hadley—Louis Ivan Blair, 20, passed away unexpectedly on Saturday, November 20, 2021. Son of Douglas and Darlene Blair, he was born in Springfield, MA on August 11, 2001.

Growing up in South Hadley Louis attended South Hadley Schools, where he liked to play Football and Lacrosse.

He enjoyed woodworking and boating on the CT river. Louis used his carpentry skills to help rebuild a barn and assist in renovating family members homes. Louis previously worked for Taylor Davis Landscaping and was currently working for his family's business.

Louis will be dearly missed by all who knew him, including his loving parents, Doug and Darlene Blair; his brothers, Douglas of Belchertown, Dereck and his wife, Lynn of Grafton, Dustin and his wife, Chantal of Chicopee and Mateo of Springfield; his sisters, Deanna & Rihana both of South Hadley, and Sophia & Paisley, both of Springfield; his grandmother, Doris Clark of South Hadley; several nieces and nephews; as well as many extended family members and friends.

In lieu of flowers, a memorial tree or flowering shrub may be planted in his honor.