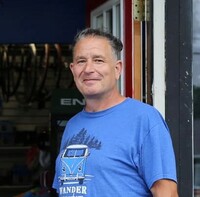 Holyoke- Mathew Brady Harris, 57, passed away Wednesday, January 26. Son of Forrest "Bud" Harris and Maria Harris (nee Evans), Mat was a beloved father of five, business owner, and a legendary BMX racing pioneer, winning two BMX national championships, the 1982 Murray Cup, and the 1983 pro cruiser world championship in Holland. A bicycle man to the fullest, Mat was the sole-proprietor of Peak Performance Bicycles in Granby, where he had been serving as a trusted friend and mechanic to the local cycling community for over 30 years. He leaves behind his five children, Robert, Elijah, Samantha, Danielle, and Chloe, as well as his partner Tina Lariviere. He is also survived by his mother Maria, his step-mother Ann, his sister Susie Smith, other extended family, and countless lifetime friends. Calling hours will be held on Monday February 7th from 4:00-7:00 p.m. at Beers & Story South Hadley Funeral Home, 646 Newton St. A celebration of life is planned to be held in his home of Pittsburgh at a later date.