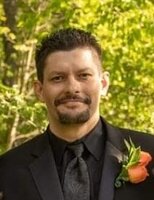 Palmer-Joshua Jeremiah Abernathy, 39, passed away at home with his loving wife by his side on March 12, 2022. Josh grew up in Zephyrhills and Dade City, Florida and graduated from Zephyrhills High School. Josh worked for Walmart for over 10 years and made numerous friends that became family in the many stores he worked at through the years. He even found his wife Katie while working at Walmart in Asset Protection, after he moved to Massachusetts in late 2016. They began dating in early 2017 and were finally married in September of 2020 in their front yard at their home together in Palmer, MA. Josh was an extreme Miami Hurricanes Football fan just like his late father, Jimmy Abernathy. He enjoyed anything Superman, traveling with his family, and loved helping people in so many different ways along his life journey. He was extremely selfless and always put others before himself. Josh's memory will forever be cherished by his wife, Katie (Cienciwa) Abernathy and her 11 year old son, Anthony Elliott, along with his children, Chasity and Austin Abernathy. He also leaves his loving brothers, James Abernathy and Brian Erhard and their families, Debbie Knickerbocker, who he called mom and Allen Erhard, who he called dad. In addition, he will also be greatly missed by the entire Cienciwa family. A visitation will be held on Thursday, March 17th from 4:00-7:00 p.m. at the Beers & Story Palmer Funeral Home along with a Celebration of Life at his childhood home in Florida on Saturday, March 19th starting 2:00 p.m. at 12030 Scott Drive Dade City, FL 33525. "No matter what your going through, be strong, be grateful, cherish every moment, and smile it's contagious. " (Josh Abernathy)