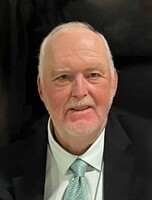 Palmer-Dean A “Farkle” McKee, 67, passed away April 9th, 2022 at his home surrounded by his loving family. He was born on March 30, 1955 in Ware, MA to the late William and Jeanette (Hazard) McKee. Dean graduated from Palmer High School in 1973 and from American International College with a Bachelors in Accounting in 1977. Dean worked for Monson Developmental Center and the Department of Developmental Services from 1978 until his retirement in 2016. He was a founding board member of the Palmer Youth Basketball Association. He was a member of Sons of Amvets, Mill Valley Golf Links, and was a former Park Commissioner of Palmer,MA. He enjoyed playing hockey for the Forest Park Senior League as well as softball for the Palmer Softball League. He played many sports and greatly enjoyed coaching his children in sports of their own. Dean was an avid Patriots and Red Sox fan and enjoyed Opening Day with all his family and friends every year. In earlier years, he spent many summers at McKee Cottages in Hampton Beach, NH which his family owned. More recently, he enjoyed spending time at his sister's house in Seabrook Beach, NH and the family annual ski trip to North Conway, NH. He was a dedicated husband and loving father. He will truly be missed. Dean was preceded in death by his parents, William and Jeanette McKee; his sister, Cheryl Lee; his niece, Crystal Laganas; nephew, William Laganas; and father in-law, Walter Swiatlowski. He is survived by his beloved wife, Linda (Swiatlowksi) McKee, and their children, Eric and Kelly McKee. He also leaves his sisters, Jill A. Laganas and her husband George, and Dawn A. McKee; mother-in-law, Helen Swiatlowski; sister in-law, Kathy Karcz and her husband Peter; nephews, Scott Laganas and Jason Karcz; nieces, Shyanne and Crystal Jill Laganas; as well as a large extended family. Visitation will be held on April 19th from 9:30-11:30AM at the Beers & Story Palmer Funeral Home with a procession to Second Congregational Church in Palmer for a funeral service at 12:00PM. Burial will follow at SS. Peter and Paul Cemetery in Bondsville. In lieu of flowers, donations in Dean's memory can be made to Second Congregational Church or to the Crystal & William Laganas Scholarship Fund.