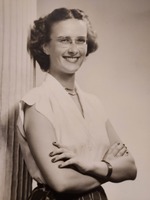 Marjorie L. (Jardine) Mortensen, age 94, a resident of Marlborough MA (formerly of Holyoke, Chicopee and Woburn MA) died peacefully on Tuesday, April 26, 2022. She was the wife of the late Carl M. Mortensen. Marjorie was born in 1927, the middle daughter of the late William Ernest Lawrence Jardine and Jane Gray (MacKnight) Jardine of Napan, New Brunswick, Canada. She attended college at Mount Allison University, in Sackville, New Brunswick. Marjorie worked as a medical secretary in Montreal before coming to Boston MA in 1948, where she continued to work and met Carl at a YMCA dance. They were married in 1950 and raised two daughters, Sara Jane and Amy. Marjorie enjoyed square dancing, knitting, and was an avid reader with a keen interest in history. She told many stories of her life on the farm and her family genealogy. In addition to her husband, Carl, Marjorie was predeceased by her daughter Sara Jane Mutch, her son-in-law David Mutch, and her sister Virginia Lockerbie. Marjorie is survived by her daughter Amy Rice (Timothy) of Northborough MA; her sister Ruth Hannah of Rexton, New Brunswick; two granddaughters, Rebecca Mutch Salce (Marco) and Elizabeth Rice; and many nieces and nephews. Interment will be at the Massachusetts National Cemetery in Bourne, MA alongside her husband. For those who wish, donations in Marjorie’s memory may be made to the cemetery where her parents and grandparents are buried, at the following address: Pine Grove Cemetery, c/o 4 Russell St, Miramichi, NB, Canada, E1N 4G4, or to the charity of one’s choice.