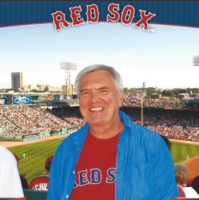 Robert R. Kudlay, 75, of Belchertown, lost his fight with cancer and died peacefully at home on May 22, surrounded by his loved ones.

Bob retired in 2005 from his reference librarian position at Springfield College. During retirement he spent much of his time attending Red Sox games, taking regular train trips to Atlantic City and New York City, as well as exploring New England and the East Coast with Joanne, his wife of 45 years. In their travels they discovered Ogunquit, Maine which became their favorite vacation spot. In addition to traveling, Bob found pleasure in model train building, bowling on local leagues, as well as patronizing the arts. Bob’s passion was always writing which stayed with him his entire life. He had written numerous short stories and poems and even published reference materials and a subscription magazine called “Puck’s Corner.” His biggest wish was to write a paperback novel. He did complete and publish his first book “The Second Rule of Law”, a legal mystery. He then embarked on his second book, “Paradise Hill”, a mystery, which he completed just weeks before his death.

Bob leaves his wife, Joanne H. Kudlay, a son Christopher M. Kudlay of Russell, and three beautiful granddaughters. He was predeceased by his parents Raymond and Phyllis Kudlay of Easthampton in 2005 and a brother Richard A. Kudlay in 1978.

Services will be private at the wishes of the family. Donations can be made to the Dana-Farber Cancer Institute, Boston.