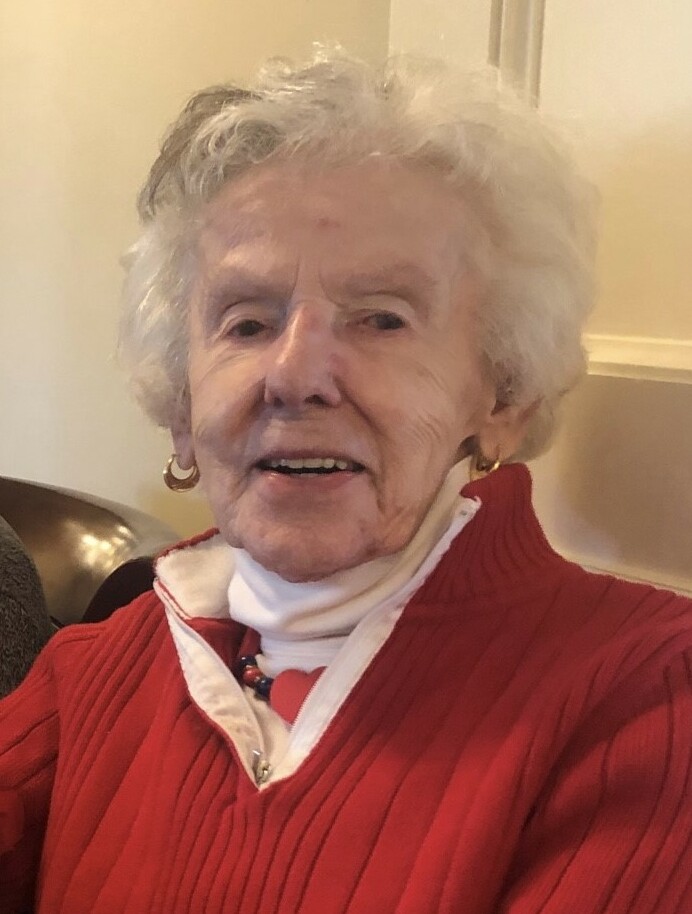 Jacqueline was born in St. Pierre Baptist, Quebec Canada to Joseph & Lydia Nadeau. On the day of her birth, March 22, 1928, a snowstorm was so bad that her Papa said he couldn't see the Earth from the Sky. It's appropriate that Jackie was born in a storm. She could be a tornado when cleaning her "castle" or on a mission.

As a teen in the depression, at 16 she went off to the neighboring big city, Plessisville, to work for a wealthy family. She would see her family one day a week. A year later, her Mom got a letter from a cousin, Jean d'Arc Fleury, in Holyoke, MA who wasn't well. She asked if one of Lydia's five daughters might be interested in coming to help her. At 17, Jackie boarded a train for the U.S. She was headed to her destiny. She often told us how beautiful Main Street, Holyoke was in the 1940s. She arrived to the Fleury’s Funeral Home (now LaRosa) to start work.

Not long after arriving in Holyoke, she met her beloved Rene on a blind date. Dad used to say he was "blind ever since meeting Mom".  Mom assimilated to the new country, took English lessons, and enjoyed going to the movies. After a bout with appendicitis, Mom returned to Canada. She and Rene wrote and he later went to meet the parents. After asking for Pepere's permission, Rene asked Jacqueline to marry him. They had a one-year engagement during which time he built 56 Lyman Street, South Hadley with the help of family on the family farm.

In 1948, Mom & Dad got married. The following year they lost their first baby, Peter. Later George ('51), Nancy ('53) and Anne ('56) filled the house. They raised us with religion, discipline„ humility and love. They prided themselves in the fact that we all graduated from college.  Their "castle" wasn't big but was always filled with people, love and laughter.

We grew up without a lot monetarily, but were rich in love so life was good. We grew up next door to Memere Leduc. The relatives came and went from all over the country & Canada. With a total of 66 nieces & nephews, Rene & Jackie surrounded us with the Love of Family - Life's biggest blessing.

In 2005, Jackie lost her beloved Rene, after enjoying 57 years together. They had a simple but fun life. A game of cards, checkers, 500, was always going on. Dad would have been proud of how Mom carried on after he passed. We know Dad will welcome Mom to heaven.

In December 2018, we lost Anne to a battle with cancer. This was a very painful loss for Mom. Losing a beloved child is most likely the worse loss ever for a parent. Mom took this loss very hard and felt terrible that Anne's boys, Nicholas & Nathan were orphans.

In 2019, Jacqueline left her beloved castle and moved to Christopher Heights in Northampton, an assisted living community. She'd had a series of TIAs (small strokes) and couldn't live in her home alone. In 2021, we moved her to Amherst Center for Extended Care.  She adapted quite quickly and having a roommate and being included in activities made her transition easier. Never thought she'd so enjoy arts & crafts.

Jacqueline contracted COVID in February 2022. Her life was never the same. Her muscles atrophied and she could never walk afterwards. She also developed pain when being touched. This made transitions difficult and ultimately her demise.

In her final days, many of the residents came into her room to tell me how much they loved Mom. These people are all in the dementia ward and are the sweet lost and forgotten. Pray for the them!

A life filled with family, fun and love.

Visitation will be held Tuesday, June 7 from 4:00-7:00 p.m. at the Beers & Story South Hadley Funeral Home, 646 Newton St., South Hadley.  Friends and family may gather Wednesday June 8 at 10:00 a.m. at the funeral home to process to St. Theresa's of Lisieux, 9 E. Parkview Drive, S.Hadley for Jacqueline's Mass of Christina Burial beginning at 11:00 a.m.  Burial will follow in Notre Dame Cemetery in South Hadley.

For those wishing, donations made be made in her memory to St. Theresa's of Lisieux, 9 E. Parkview Drive, S.Hadley, MA 01075