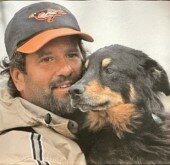 Neil J. Martell II, 53, passed away June 30, 2022, while camping in Bend, Oregon. He is the son of Neil R. and Jeannine (Barsalou) Martell.
Born in Holyoke, MA, on August 20, 1968, Neil grew up in Chicopee and graduated from Chicopee Comprehensive High School in 1986 and was a member of the swim and football teams. He attended Bridgewater State College and enrolled in the culinary arts program at Holyoke Community College after which he landed a position as a cook at Walt Disney World in Orlando. He enlisted in the Navy in August 1991 where he was a culinary specialist (MSSN) on the nuclear submarine, the USS Tautog. He was stationed in Hawaii and his last tour took him to Japan.
After leaving the Navy, Neil worked as a cook in several restaurants and retirement homes in Massachusetts, Florida, California and Oregon. Neil always enjoyed traveling and had either backpacked or rode his bike throughout several countries in Europe and Canada solo or with friends. He was never alone for long as it was easy for him to meet new people and forge lasting friendships. Neil also was passionate about music and was fortunate to see Pink Floyd’s penultimate concert at Wembley Stadium. He also was a huge Dave Matthews fan and had attended more than 50 concerts on both US coasts.
Many years ago, Neil developed a physical disability that forced him into early retirement, but he continued to give back to the community by working with and for others who needed help. He retreated to a more simple life in his motor home, hiking and camping in various parts of Bend. Neil was a good person who was always willing to lend a helping hand and share whatever he had. The world was a better place with him in it, and his passing has left a void in many people’s lives.
He is survived by his parents Neil and Jeannine Martell, his sister Kristina Barnaby (Paul), his two nephews Paul II and Andrew, an aunt, uncles and cousins, and his many friends in Oregon and Massachusetts who have reached out to share stories of his compassion and kindness. He was predeceased by his grandparents Neil J. and Janemary Martell and Gerard and Yvonne Barsalou and his aunt Constance Lee Schmitter. He also was predeceased by his faithful four-legged companion Blossom.
Calling hours will take place Saturday, Aug. 6, 2022, from 10 am - 12 noon at Beers & Story South Hadley Funeral Home, 646 Newton Street. A funeral Mass at St. Anne's Church in Chicopee will follow at 1 pm. Burial will be at the convenience of the family.
Dress is casual, and Neil would say “shoes optional.”
A tree-planting ceremony will take place on his birthday in Fairfield, CT.
In lieu of flowers and to honor Neil’s love of rescue dogs, please consider a donation to Mutt Rescue in Chicopee at https://muttrescueofmassachusetts.org/ or to Bend United Methodist Church at https://www.bendumc.org/giving/.