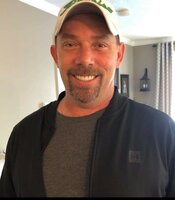 Agawam -Steven J. Giroux, 49, passed away suddenly on July 17, 2022 at his home. He was born on August 9, 1972 in Holyoke, MA to David and Joyce (Labrie) Giroux of Chicopee.  He was raised in the Aldenville section of Chicopee and graduated from Chicopee Comp High School Class of 1990.  After graduation he graduated from STCC with an Associate's degree.   He worked as an over the road truck driver for H.O. Wolding Inc. for many years and was currently employed as a truck driver for Advanced Drainage Systems.   Steve loved the game of golf and moved to Texas where he became a golf pro. Steve was a member of the Chicopee Sportsmen's Club and Granby Bow & Gun Club.  He also enjoyed  fishing, camping and competed in Archery.    Besides his parents, he is survived by his sister, Karen M. Hoar and her husband Richard of Chicopee.  He was Uncle V to his 2 nephews, Ryan and Tyler Hoar, his niece and goddaughter, Madison Hoar and his 2 goddaughters, Chelsea Godere and Kelsey Morrissette. He will also be missed by many lifelong friends. Calling hours will be held at Beers & Story South Hadley Funeral Home on July 22nd from 4:00PM - 7:00PM.  Funeral services will be at 9:00AM on Saturday at the funeral home, followed by burial in St. Rose de Lima Cemetery in Chicopee. Donations in his memory may be made to the American Heart Association.