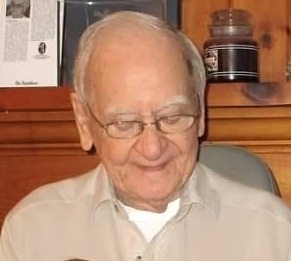 Wilbraham - Wallace G. Mueller, 98 passed away peacefully on August 31, 2020.    Born in Springfield, MA on December 21,1921, he was the son of Joseph Julius and Flora (Gebbie) Mueller. Wallace was raised in Springfield, attended Springfield schools, and began his professional career at the Springfield Armory. He married the love of his life, Mildred, in 1943 and was devoted to her until her death in 2016. He proudly served his country in the US Navy during WWII.  He and Mildred raised their family in West Springfield before moving to Springfield, Virginia to take a new job with the US Government in Washington D.C. Upon his retirement in 1975, they settled in Wilbraham and, for over 20 years, they divided their time between Wilbraham and  Barefoot Bay, FL .   Wallace enjoyed listening to music, staying atop of current affairs and keeping up to date with his computer skills. He also was a member of the Samuel Sherwood Masonic Lodge. He will be greatly missed by his daughter, Flora Guzik and husband Richard of Palmer and his son Charles Mueller and wife Kate of Southern Pines, NC.    He leaves six grandchildren Todd Guzik and wife Dawn of W. Brookfield, MA, Erik Guzik and wife Erinn of Missoula, MT, Keith Guzik and wife Anya Pantuyeva of Denver, CO, Matthew Mueller and wife Heidi of Cullman, AL, Sara Sogers and husband Gregg of Madison, AL and Rachel Lopez and husband Javier of Madison, AL.  He also leaves eleven great grandchildren; Paige, Kurtis, Jordan, Evan, Liam, Mallory, Lyla, Jere,  Isabel, Timofey, and Kirill. Services are private and Beers & Story Palmer Funeral Home was entrusted with the arrangements.   Memorial contributions may be made to Shriner's Hospital.