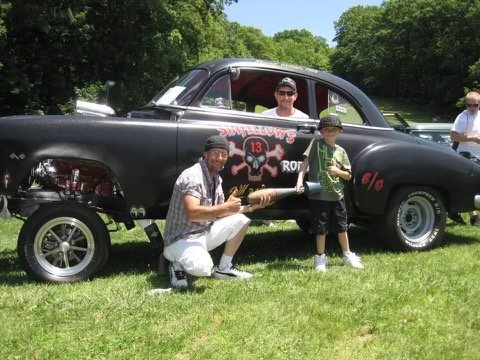 Wales—James J. Smith, 53, passed away suddenly on Sunday, April 25, 2021. Son of Jean (Ripolone) Smith and the late Charles E. Smith, Jr, he was born in Hartford, CT on December 21, 1967. Raised in Windsor Locks, CT, moving to Brimfield MA in 1987 and later to Wales, MA. Jimi was employed at Northern Tree of Palmer Ma for 20 plus years as a Log Truck Operator.

Jimi and his Identical twin brother Charlie lived together and raised their family. They were so close that you never mentioned one of their names without including the other. The only time they were separated was when Jimi was in Boot Camp. Together he and his brother enjoyed building and rebuilding anything with a motor or wheels.

He was a devoted father to his son Damien, his pride and joy. Recently, Jimi was so excited when his lady love Lee Anne gave birth to his second son Antonio (Nino). Jimi was an avid NASCAR fan and loved going to Bruins and Patriot games with his brothers Chuck, Glenn and Brother inlaw Don. He enjoyed ice fishing with his brother Glenn and had to spend Thanksgiving with his Sister Shelley if only for her Stuffing (with no onions). He loved to tease and make his Sister in-law Angie laugh. He always found time to reach out to his adopted brother Mike in Florida to hear about his adventures on the Kyle Petty Cross Country Benefit Ride. He was a devoted Uncle to Courtney, Alexandra, Glenn Jr., Jillian and Tyler. He looked forward to Uncle Paul’s Easter Omelets and Aunt Carol’s Bunny Bucks Auction and enjoyed spending time with Aunt Mary Ann and Uncle Ed snowmobiling around their New Hampshire Camp. Jimi shared his love of cars, motorcycles and snowmobiles with his Uncle Mark and Aunt Dee.

He was devoted to his Mom and called her every morning at 6:00 am to give her the weather report and wish her a good day and Sundays were spent mowing her lawn, Dinner and watching the race on one TV and Patriots on the other TV. Jimi will be dearly missed by all who knew him. He was always ready to lend a helping hand and once you met him you became a friend for life. He leaves behind his large loving family as well as many extended family members, fellow employees, Club Members and many dear and special friends.

Visitation will be Sunday, May 2, 2021 from 1:00-4:00pm at Beers & Story Palmer Funeral Home. A graveside service will be held on Tuesday, May 4, 2021 beginning at 11:30am in Brimfield Cemetery. In lieu of flowers, memorial donations may be made towards the Educational Fund for Damien and Antonio mail to Jean Smith, Trustee 71 Haynes Hill Road, Brimfield, MA 01010

To send flowers to the family or plant a tree in memory of James Smith, please visit Tribute Store
Sunday
2
May