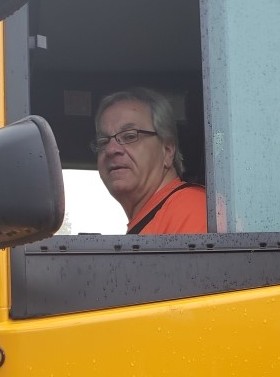 Ware--Michael Joseph Mieltowski, 56, passed away peacefully surrounded by his loving family on June 7, 2021 at Cooley Dickinson Hospital in Northampton. Son of the late John and Santa (Mastronardo) Mieltowski, he was born in Worcester on July 6, 1964. He grew up in the Barre, Ware and Gilbertville areas. Michael was a high school graduate of the Quabbin Regional School District in 1982. Michael began working after high school at McDonald’s in Ware. At times he worked several jobs at once including at Ames in Palmer, Palmer Sunoco and Cumberland’s. Michael became a bus driver (his ultimate job) in his early work years starting with Palmer Motor Coach. He also worked at Laidlaw, FM Kuzmeskus and was presently employed by Swift River/FM Merrifield Company.

He loved his kids and there are many occasions at a restaurant or other locations that teens or adults would remember him as their bus driver (probably because of the Friday treats or last day of school pizza). "You drove me to high school or kindergarten" was often said to him in later years. Michael and Brian also did foster care for 12 years. He clothed, advocated at school and treated each child as his own. Michael loved helping people and no challenge was too great for him. We will all miss his ability to listen and solve problems for people. If it was a sad time such as a death or sickness Michael showered you with his cards and maybe a visit and an apple pie. Any time people did things for him there was often many “thank you” from him. “No rush “was a favorite line. At McDonald’s he would often say “pay the car behind” especially if the occupants were elderly, first responders or someone in need.

He loved to cook especially Polish food. Thanksgiving could see up to 30 people at the table to cook for and anyone was welcome. When cooking he was in his glory. He also loved the "all you could eat salad and bread sticks" at Olive Garden. He loved rides especially to Cape Cod and Dowes Beach in Osterville. His favorite spot in the Quabbin was at Hank’s Meadow where he could sit for hours talking under the big oak tree. He loved sitting on the front porch on a rainy day listening to the rain fall. His great niece Brianna was a special love of his.

Michael will be dearly missed by all who knew him, including his loving partner of 22 years, Brian Winslow; his brothers, Paul Mieltowski of Ware and John Mieltowski Jr and his wife Deline of Palmer; Michael will also be missed by his niece Theresa Beynor and her husband Derek; his nephew Kenneth Mieltowski and his partner Samantha and his great niece Brianna Beynor. A special thanks to the doctors, nurses, and the staff at Cooley Dickerson Hospital as well as Dr. Yang and the nurses at the Massachusetts General Hospital Cancer Center in Danvers. We would also like to thank the management and employees of the Swift River/FM Merrifield Company for all their support.

A celebration of Michael’s life will be held at the Quabbin Reservoir off of Route 9 at Hank’s Meadow at noon on June 26th (rain or shine) Bring a chair or blanket and share your stories and memories. I am sure he will be there in some form under the oak tree with us. In lieu of flowers, memorial donations may be made to the Thomas J O’Conner Animal Shelter & Adoption Center in Springfield, Ma.

To send flowers to the family or plant a tree in memory of Michael Mieltowski, please visit Tribute Store