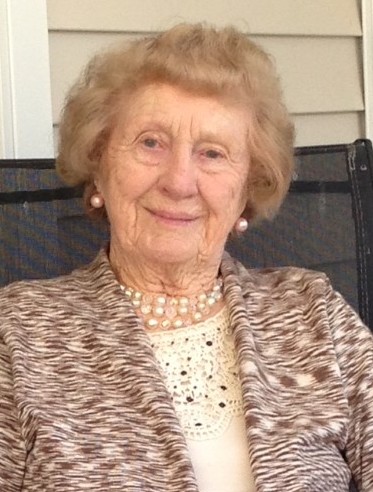 South Hadley--Margaret Gray Colson Devot, age 101, passed away peacefully at Loomis Village on Sunday, July 18, 2021.
She was born in Glasgow, Scotland on Jan 2, 1920, the first child of Margaret and John Gray of Gowan. John left for America in 1924. On Nov. 1925, after he was settled with his job and home, his wife and children, Margaret, Gilbert, and Agnes joined him, arriving on the U.S.S. Baltic. Their new home was City Point in Boston, within walking distance of the ocean and entrance to Castle Island. Years later, they moved to the Codman Hill area of Dorchester and brother, John was born. Margaret was in the first graduating class of the Woodrow Wilson School and later graduated from Dorchester High School for Girls. She married Edmund Garrett Colson on June 17, 1939. They bought their first home in Ponkapoag, Canton, MA where they had three children: John Edmund, Edmund Garrett Jr, and Patricia Gray. Years later, they moved to Westchester, CA where Janice Ramsdell was born. They returned to Ponkapoag in 1956 and raised their family in Canton, MA. Margaret was active in many community organizations including Women’s Club, Camp Fire Girls, and Garden Club, as well as being an involved member of the First Parish Unitarian Church of Canton. Margaret was a skilled painter, specializing in watercolors.
In 1977, Margaret and Ed retired to Sandwich, MA. Margaret lost her beloved husband in January 1978. Margaret later married Andre Devot, and they lived together happily until his death in 2009. Margaret subsequently moved to Loomis Village in South Hadley, MA where she was active in the retirement community making many new friends. She leaves behind her 3 children: Garrett (Gail), Patricia (Jim), and Janice; her 3 stepchildren, Paul, Bob (Marsha), and Richard as well as 14 grandchildren, 20 great grandchildren, and 6 great-great grandchildren.
In addition to her parents, Margaret is predeceased by her brother, Gilbert and sister, Agnes, as well as her son, John.
Private graveside services will be held at the Canton Corner Cemetery.
In lieu of flowers, memorial donations may be made to a charity of one's choice.

To send flowers to the family or plant a tree in memory of Margaret Devot, please visit Tribute Store

Share Your Memory of
Margaret
Upload Your Memory View All Memories
Be the first to upload a memory!
Share A Memory
Send Flowers