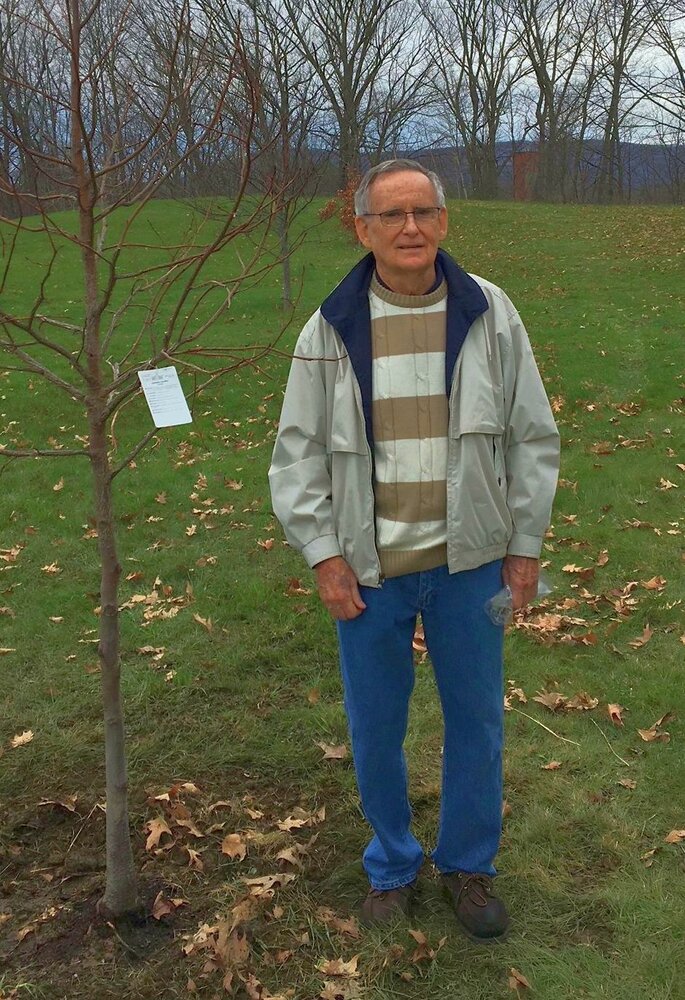 John (Jack) Fleming, age 86, passed away peacefully on December 8, 2021 at Hospice of the Fisher Home in Amherst, MA. Jack was born in Holyoke, MA on August 11, 1935 with 100% Irish heritage to his parents Francis and Mary (O’Connor) Fleming. His father was a highly regarded account manager for National Blank Book in Holyoke for over 40 years and his mother stayed at home to care for Jack and his older sister Claire.

Jack grew up in in his younger years in Holyoke where he attended public schools through 8th grade. His family then moved to South Hadley where Jack attended and graduated from South Hadley High School in 1953. Jack enjoyed and was very talented at working on car engines and was known to drag race his dad’s car back in the day on the backroads of South Hadley. In his senior year Jack met and fell in love with a pretty freshman Judy (Miller) Fleming and their love story spanned over four decades. They were married in 1957 - lived in Holyoke for a few years – and then built their forever home in South Hadley where they raised their family: Jeff, Barb and Steve. Jack was very talented at “fixing things” and was always willing to lend a hand to help extended family, neighbors and friends with household repairs.

After serving honorably with the Army National Guard, Jack learned the challenging trade as a lithographer and worked in this highly specialized field for over 40 years with Diamond International in Springfield, MA and then Avery Denison in Holyoke. He was a career-long member of the Graphic Communication International Union. Jack was also an avid fisherman – in 1965 he caught the largest walleye pike that year in the State of Massachusetts at Quabbin Reservoir.

Jack was the consummate family man. He and Judy were always supportive of their childrens’ sports and activities – including active roles with the South Hadley High School Band Parents Association. Rarely was a sports game, dance recital or other event missed. Jack and Judy also thrived in their role as grandparents and absolutely enjoyed supporting and loving their next generation of six grandchildren.

Jack retired in 1995 when Judy fell seriously ill – and their love only grew in their later years together with Jack looking after and caring for her during difficult times in her own fight to beat cancer. Following Judy’s death in 1999, Jack dedicated his time to family.  He made many trips to Kansas to visit his son Jefferey and family.  He traveled to the Cape for family vacations and 4th of July celebrations and enjoyed visiting his daughter Barbara and husband Rich in Naples.  Jack spent many a Sunday going to his son Steve and wife Tracy’s home for dinner.  He relished the countless camping and fishing trips with his son and grandson on the Lake in New Hampshire and closer to home on Lake Metacomet.  Even with all this travel, he rarely missed any of the grandkid’s extracurricular events and he always stocked the kid’s favorite mints and red-hot gum for each and every family gathering.

He also devoted his time and talents to civic causes with the Town of South Hadley. He served on the Town of South Hadley Conservation Commission for 19 years (2000-2018), including several years as Chair. In 2018, a tree was planted in his name by students at Michael E. Smith Middle School on Arbor Day to honor Jack and his years of service with the Commission. He also served with other organizations with the Town of South Hadley – to include the Council on Aging, the Bicentennial Canal Park Committee and Council on Aging TRIAD. Jack enjoyed life with numerous friends who passed before him as well those whom have survived. Jack was also a member of Knights of Columbus Council 404 Chicopee and a communicant of St. Theresa of Lisieux Church in South Hadley.

A visitation for family and friends will be held at Beers & Story South Hadley Funeral Home, 646 Newton Street from 10:00-11:30am Thursday December 16th. Burial and graveside service will follow at noon at Evergreen Cemetery South Hadley.

In lieu of flowers, memorial contributions are suggested to the Council on Aging, 45 Dayton Street, South Hadley, MA 01075.

To send flowers to the family or plant a tree in memory of John "Jack" Fleming, please visit Tribute Store
Thursday
16
December