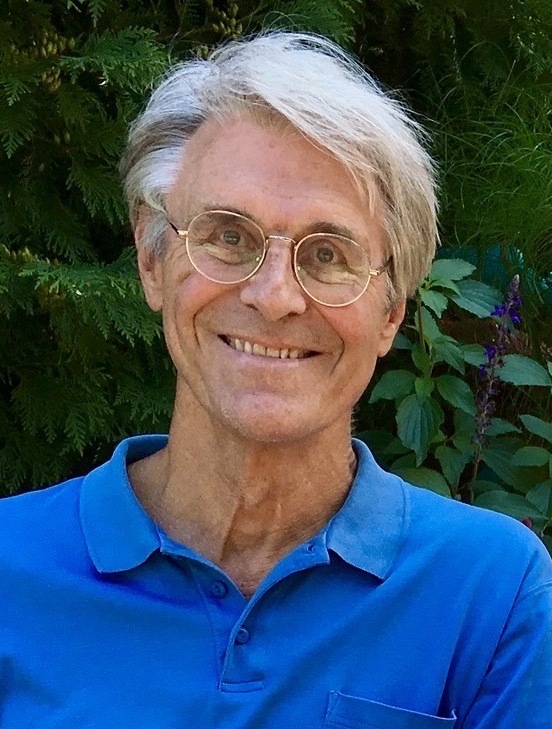 Mark Austin Peterson passed away peacefully at home in South Hadley, MA, with his wife Indira by his side, on Friday, May 27, 2022. Diagnosed with a glioblastoma brain tumor in the spring of the previous year, he faced his daunting illness with characteristic courage, grace, and dignity.

Born August 30, 1946, in New Haven, Connecticut, Mark was the son of Dr. Elroy R. Peterson and Jean Austin Peterson. He grew up in Ames, Iowa, and graduated from Ames High School in 1964. That year he was named one of two Presidential Scholars for the state of Iowa by President Lyndon B. Johnson. He attended Amherst College, where he avidly explored the liberal arts curriculum, majored in physics, and graduated summa cum laude in 1968. He earned a Ph. D in physics at Stanford University in 1973. After a year of teaching at Montana State University, Mark joined the Physics Department at Amherst College, teaching there from 1974 to 1980. At Amherst he met Indira, the love of his life, when she came to teach at the Five Colleges. Mark and Indira got married in 1979, and their daughter Maya was born the following year. Mark taught for a couple of years at George Mason University, but the family returned to their beloved Connecticut River Valley in 1982, when both Mark and Indira joined the faculty at Mount Holyoke College. Mark retired from Mount Holyoke in 2021, as Professor of Mathematics and Physics.

Mark’s scholarship and teaching embodied the originality of his thinking, the breadth of his intellectual interests, and his passion for the humanities as well as the sciences. From his early work on classical field theories and different areas of theoretical physics to his study of microhydrodynamics and the biophysical properties of cellular membranes to his extensive research and writing on the sciences and the arts in the Renaissance, curiosity and delight in discovery infused everything Mark did. His 1997 cover article for The Mathematical Intelligencer makes the case that Piero della Francesca, a great artist of the Italian Renaissance, was also the greatest mathematician of the fifteenth century. His 1979 article “Dante and the 3-sphere” in the American Journal of Physics presents an argument that the universe that Dante carefully describes in the Divine Comedy is a three-dimensional sphere, an object that was not described mathematically until the emergence of non-Euclidean geometry in the 19th century. In Galileo’s Muse: Renaissance Mathematics and the Arts (Harvard University Press, 2011), he compellingly– and engagingly– argues the birth of modern physics from the knowledge and practices embedded in the interface of mathematics with architecture, visual arts, music, and poetry. Mark viewed interdisciplinary approaches as a springboard for creative thinking and learning. He flourished in the vibrant intellectual community at the Five College Consortium, participating in such forums as the Valley Geometry Colloquium, the Renaissance Center at UMass, and the Five College Early Music Collegium.

A dedicated and innovative teacher of undergraduates, Mark taught across the full spectrum of courses in mathematics and physics at Mount Holyoke College, also co-teaching with colleagues in other departments. He helped develop a course that made the students partners in mathematical experimentation. He worked with summer research students from all over the US who came to Mount Holyoke through the National Science Foundation-funded Research Experiences for Undergraduates program. He also wrote computer programs for learning Chinese characters and the Sanskrit Devanagari script. The hallmark of Mark’s approach to all intellectual endeavor was his ability to ask fundamental questions with great clarity. This ability, along with his nurturing spirit, and skill in listening made him a beloved teacher, mentor and colleague. Mark combined brilliance with a winning humility and utter integrity of character. His gentleness and human kindness were readily apparent in his beautiful smile. It was also this kindness that undergirded his tireless activism for social, racial, and gender justice. A sworn progressive, he was an active member of the South Hadley Democratic Town Committee.

A true Renaissance man, Mark enjoyed reading the classics, and singing and listening to early music. Dante, Homer, and the Icelandic sagas kept him company throughout his life. He spent an entire sabbatical year memorizing the poems of Keats, Milton, and Schiller. He loved travel and cultural encounter, and he had a flair for languages. A summer spent in a Mexican village through Amherst Amigos left a deep impression; teaching English in Shimonoseki, Japan, kindled a love of all things Japanese. Reading Dante and Galileo led to a lifelong immersion in Italian language and culture. Indira initiated him into India’s cultural riches. With his fluent German, Mark felt right at home in Heidelberg, where he spent a sabbatical year with Indira and Maya, and at the Technical University in Munich, where he was a visiting scientist every summer for many years. Swimming was Mark’s grand passion. Always a good swimmer, at age sixty-seven he plunged into the world of open-water swimming, enjoying long-distance ocean swims in Greece, Croatia and Sardinia.

At the heart of Mark’s joy in life was love of family, a quality that made him a wonderful son, brother, husband, father, and uncle. Mark and Indira knew they were soul-mates from the moment they met. There were many things that drew them to each other—love of languages and cultures, classics, education, music, art, scholarly sleuthing, cats, bird-watching, social justice –– but there was, above all, the harmony of kindred spirits nurturing the best in one another. Maya completed the magic circle, delighting her parents with her sweetness, brilliance, and zest for life. Mark shared in every aspect of parenting; he and Maya had a special bond, expressed in a myriad interests and adventures, including reading, hiking, and solving puzzles. Mark, Indira, and Maya thrived in the company of two large and loving extended families. They travelled together, exploring the wonders of the world, but Mark loved nothing more than enjoying simple everyday pleasures at home with Indira and Maya—morning espresso, a beer at the end of the day, stargazing, sitting on the screen porch watching fireflies and thunderstorms, baking apple pies in the fall.

As Maya grew up, Mark and Indira rejoiced at her many gifts––her brilliance as student, scholar, and teacher, her sense of adventure, and her vast kindness of spirit. They were delighted when Maya found love, and when she published an important book on Central Asia’s environmental history. Just prior to his retirement from teaching, when Mark was told that he had a terminal brain tumor, he received the news with equanimity, saying that he had lived a rich and joyful life. But joy left Mark and Indira’s lives in June 2021, when their beloved Maya died of a rare complication of childbirth, followed by the death of Priya Luna, infant daughter of Maya and her partner Marm Kilpatrick. By 2022, however, there was some measure of comfort in knowing that Maya lives in the hearts of the many people who love her, and that her light will shine on in the world through the scholarships and fellowships that have been established in her name, inspiring and nurturing young men and women to follow their aspirations in education and the preservation of the environment. Mark’s own exemplary life will continue to inspire and warm the hearts of all who had the privilege of knowing him.

We are grateful that Mark graced our lives, and we miss him sorely, as do the many friends, colleagues and students whose lives he touched, invariably for the better.

We are deeply grateful to Dr. Zubeena Mateen and the team at Holyoke Medical Center, and Dr. Luis N. Gonzalez Castro and the Neuro-Oncology team at Dana-Farber Cancer Center for the excellent treatment and care they extended to Mark. We thank Hospice of the Fisher Home, Amherst, and the Gomes Home Care Agency for their compassionate care of Mark during his final days.

Donations in Mark’s memory may be given to one of the many institutions and causes that he supported, among them:

Share Your Memory of
Mark
Upload Your Memory View All Memories
Be the first to upload a memory!
Share A Memory