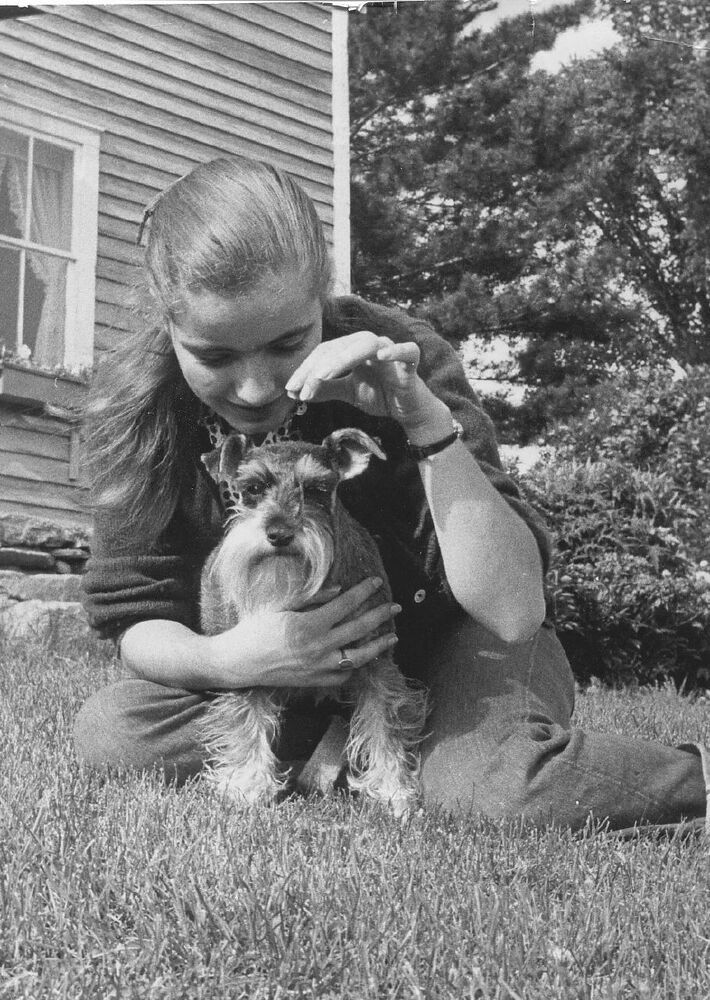 Anne Morrison Smyth of Cambridge, Massachusetts and Ripton, Vermont was born to Kathleen Johnston Morrison and Theodore Morrison on January 19, 1937. Her elder brother Robert Henry Morrison was her best friend until his early death in 1954. Anne grew up on horseback in the Green Mountain National Forest during the summers, where her beloved father Ted was the Director of the Bread Loaf Writer’s Conference in Ripton for 25 years, and in Cambridge during the school years where her father was Chair of the Harvard English Department for 50 years. Anne grew up surrounded by literature, arts, and a deep appreciation for the life of mind, body, and spirit. She was also accomplice and friend to Robert Frost from infancy, sharing deep affection, humor, and the bond of family he had with Ted, Kay, Anne, and Bobby. The Homer Noble Farm in Ripton was an oasis of culture in the heart of the Green Mountains that made everyone who visited larger than they were before they came: Anne’s gracious and wild spirit helped make it what it was. A graduate of Radcliffe College, Anne was a lifelong photographer whose work was especially remarkable for her intimacy with flowers and her painterly pastorals. Her portraits of both humans and animals always expressed the deepest nature of her subjects’ characters with intense honesty and compassion. Anne was married to Chisholm Farrell Gentry, with whom she had her first two children Chisholm and Moira Gentry. She later re-married to Paul Smyth, and had her second two children Joshua and Jessamyn Smyth. In the second half of her life, Anne was a devoted counselor for the Holyoke Hospital Outpatient Treatment Center, offering transformative support to hundreds of people seeking help with alcohol and drug addiction. Her compassion, ferocity of dedication to recovery principles, and ongoing support and participation in recovery circles was a power of example that changed innumerable lives. Anne and Billie Bozone, her life-partner of 36 years, were a sober center of gravity around which many friends and acquaintances gathered, always coming away better, wiser, and more themselves. Anne was a rare and remarkable force of nature with a questing intelligence, an unforgettable beauty, and a brave and untamed spirit. Her extraordinary bond with animals, compassionate connection with others, and generosity of heart to her fellow travelers will be remembered and carried forward by all who loved her.

A memorial celebration of Anne’s life will take place at Beers and Story Funeral Home in Belchertown, Massachusetts on Saturday October 1, 2022 with a gathering time from 2:30-3:00pm followed by an opportunity to share memories of Anne from 3:00—4:30pm.

In consideration of Anne’s friends who are elders, immune compromised, or have difficulty traveling to the memorial for any reason, here is the link to attend the memorial remotely https://client.tribucast.com/tcid/7918200612.

To send flowers to the family or plant a tree in memory of Anne Smyth, please visit Tribute Store
Saturday
1
October

Share Your Memory of
Anne
Upload Your Memory View All Memories
Be the first to upload a memory!
Share A Memory
Send Flowers