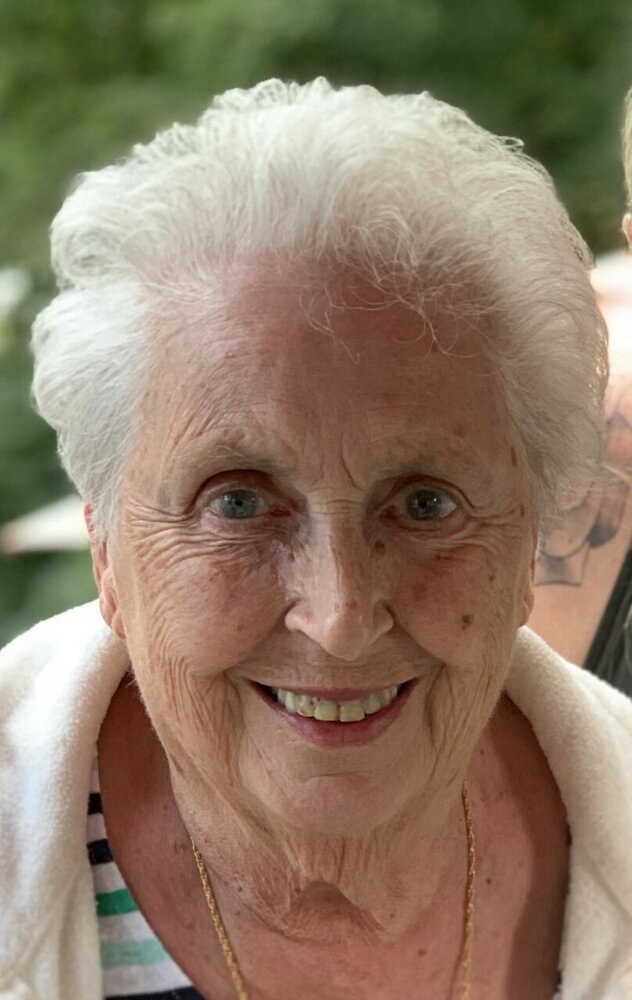 Obituary of Jacqueline A. Kras

Jacqueline (Guiel) Corey Kras, 90, passed away September 24, 2022 surrounded by her loving family at her granddaughter's home in Westfield. Jackie was a lifelong resident on Hadley Street in South Hadley. She was the daughter of the late Eugene and Serella (Beaudry) Guiel and her adopted parents
Delena and Frank Corey. She was a faithful communicant of St. Theresa of Lisieux Parish in South Hadley where she belonged to the Women's Group and served in various charitable capacities throughout the years. She was a daily Mass communicant and soon became part of the group know as the “Morning Mass Ladies”. For upwards of 20 years, she looked forward to September in Biddeford, Maine where she attended the Catholic Women's Retreat by the Sea . She attended the Providence Hospital School of Nursing and worked at various jobs but dearest to her heart was caring for her family and those in need. When her grandchildren began arriving, she chose to leave the work force to provide their daycare and went on to make it her midlife career, caring for other families children as well. She became Gramma Jackie to all of them. She enjoyed candle pin bowling, and was an avid fan of the National Figure-Skating Championship competitions, attending many of the competitions held in the United States with a group of dear friends. She liked to tell people that although she loved watching skating, she herself could not even stand up on them. She and her sister Elaine looked forward
to Saturday morning visits to Jen’s Hair Care where they visited, folded the towels and had their hair done. Jackie loved to camp with her family in the early years and more recently enjoyed cruising with family members who enjoyed this passion as well. She was also a talented quilter and many of her family members will cherish her works. She will be remembered by all for her glass half full approach to life and her kind, humble, compassionate spirit and for her unfaltering love for her family. Jacqueline was predeceased by her loving husband, Eugene R. Kras in 2013 and her 6 sisters, Elaine, Joan, Vivian, Jeannie, Alice and Lorraine. She will be forever missed by her five children, Richard G.Kras, Dianne M. Chagnon and her husband Edward all of South Hadley, John W.Kras of Amherst, Barbara J. Sadler and her husband Mark of Westfield and James A. Kras and his wife Darlene of Agawam. She leaves 7 beloved grandchildren, Nicole Siswick and her husband Zachary, Brielle Catellier and her husband Matthew, Tambria Pioggia and her partner Steven Jaimangal, Danielle Pioggia, Mary Kate Judson, Jason Kras and his wife Kristen, Lee Masters and his wife Erin, and 8 beloved great grandchildren, Alena, Asher, Xavier, Christian, Isla, Kaia, Adam & Drew.  She also leaves 2 sisters-in-law, Irene Stetson and Patricia Lucas and her dearest friends, Betty and Vickie. She leaves many Hadley street neighbors who , in the past few years, visited with her on her porch where she sat every day the sun was shining, especially George and Joan and daily phone calls from her long time friend and neighbor, Beverly. She will be missed by many nieces and nephews on both sides of the family and numerous dear friends. She also leaves many grand pups and her faithful kitty companions Caesar and Honey ( her therapy cat ).

Calling hours for Jacqueline will be held on Monday, Oct. 3 from 4-7 pm at the Beers & Story South Hadley Funeral Home. The funeral will take place on Tuesday morning 9 am from the funeral home followed by a Mass of Christian Burial at 10 am at St. Theresa of Lisieux Parish, 9 East Park View Drive, South Hadley. Her burial will follow at Evergreen Cemetery in South Hadley. In lieu of flowers, donations may be made to: Catholic Women Retreat by the Sea, Jackie Kras Memorial Fund 74 Hadley Street, South Hadley, Ma 01075

To send flowers to the family or plant a tree in memory of Jacqueline Kras, please visit Tribute Store
Monday
3
October