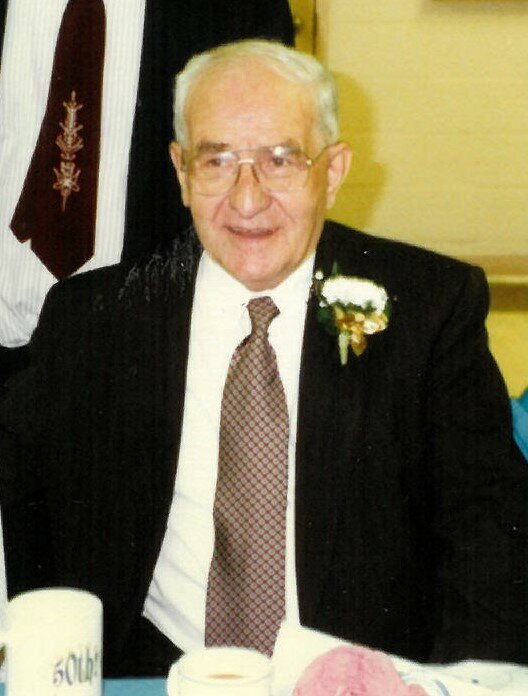 PALMER – Clarence J. Michaud, 99, of the Village of Three Rivers in Palmer passed away quietly on December 23rd in the home where he had lived for 66 years. He was born in Van Buren, Maine on November 22, 1923, the son of Victorie and Marie (Bouchard) Michaud. He was raised in Van Buren and graduated from Van Buren Boys High School in 1941. The following year, 1942, he left in search of work and joined his brothers in Biddeford, Maine. It was there that he met his future wife, Exillia (Nancy) Neault. The outbreak of WWII would change both their lives for several years; she, as a welder in the war-era shipyards in Portland, Maine and he in the U.S. Army stationed in Iceland and eventually France. There he served with the 54th Ordnance Ammunition Company. He was Honorably Discharged at the rank of Staff Sergeant in 1946. He and Nancy were married on June 1, 1946 in Biddeford, Maine. Initially, he worked for the Maine Turnpike Authority during the building of the state’s first major highway. Later he worked for Delorge’s Bakery in Biddeford. In 1956, he and Nancy moved their young family to Palmer, Massachusetts and purchased their first and only home. He was employed with the Monsanto Chemical Company in Indian Orchard for 28 years before his retirement in 1984. In retirement, he and Nancy travelled extensively with friends and small church groups. He was actively involved with the Palmer Food Share for nearly 25 years and often talked about the importance and the value of the work of the volunteers and the organization. He continued with volunteer work well into his nineties. An avid sports fan, he loved talking about sports history and any Boston-based team. He was blessed with a seeming encyclopedic memory honed by a genuine inquisitiveness about nearly everything that came his way. But if there was one topic of conversation that could elicit fervent response, it was the importance of friends and family, immediate and extended. He cherished phone calls and visits from nieces, nephews, and friends, until his final day.

Calling hours are on Tuesday, January 3 from 5 to 7 PM at Beers & Story Palmer Funeral Home. A Funeral Mass will be held on Wednesday, January 4 at 10:00 AM at Divine Mercy Parish with burial to follow at St. Anne’s Cemetery in Three Rivers. Friends and family may gather at the funeral home at 9:00 a.m. In lieu of flowers, donations may be made in his memory to the Shriners Hospital for Children, Springfield.

To send flowers to the family or plant a tree in memory of Clarence Michaud, please visit Tribute Store
Tuesday
3
January

Share Your Memory of
Clarence
Upload Your Memory View All Memories
Be the first to upload a memory!
Share A Memory
Send Flowers