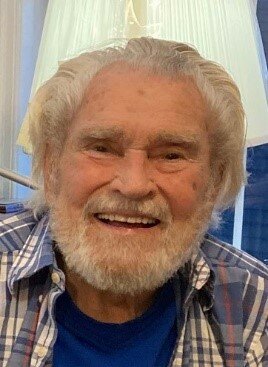 Dave, as he was known by all, proudly served his country in the US Navy during WWII on the USS Memphis and the USS Quincy and was present at D-Day in Normandy and the surrender of Japan in Tokyo Bay, as well as escorting President Roosevelt to the Yalta Conference.

After marrying and starting a family, he moved to Melrose and used skills he developed as a sailmaker in the Navy at Atlantic Awning Company, which he eventually owned and operated in Melrose from 1959-1982 and Port Charlotte, Florida from 1982-1991, when he retired.

Throughout most of his life, he was very active in local politics, civic organizations, and faith communities and served on the Board of Registrars, Board of Assessors, Board of Alderman and as City Clerk in Melrose. He was also a member of the Chamber of Commerce, Lions Club and a Rotary Club Paul Harris Fellow. When he moved to Port Charlotte he served as a Charlotte County Commissioner.

In 2018, Dave moved to South Hadley, MA to be closer to his children.

A graveside service with military honors will be held at a later date at the Massachusetts Veterans' Memorial Cemetery in Agawam, MA.

To send flowers to the family or plant a tree in memory of David Schmidt, Jr., please visit Tribute Store